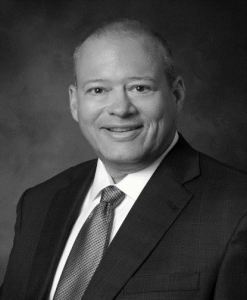 Matt Harvill served as Chairman of UWC – Strategic Services on Unemployment & Workers’ Compensation (UWC) for more than 13 years (2003 to 2016). He is the longest serving Chairman of UWC. Matt’s contribution as Chairman of UWC shaped the organization in its policy approach and in providing a stable foundation and guidance over an extended period of tremendous change in the workforce and unemployment insurance.

Matt’s career began with Kelly Services in November of 1986.  His current title is Vice President, Operations Shared Services, Global Solutions. As he changed roles at Kelly Services his colleagues recognized him for his service:

For more than two decades, Matt has led the Unemployment function for Kelly Services, bringing it to a state of national prominence. Today we recognize his years of dedication and service to the business community.

As Chairman of UWC, Matt was a leading voice that recognized the valuable role that unemployment insurance played in human resource management, the changing nature of the workforce in relying increasingly on temporary services and less “traditional” forms of employment, and the need for an unemployment insurance system that maintained integrity and provided a dependable source of temporary partial wage replacement for individuals who became unemployed through no fault of their own.

During Matt’s tenure, not only did the UI system survive the Great Recession of 2008, but the “temporary” 0.2% FUTA surtax paid by employers for decades was repealed in June of 2011.

The Federal/State Unemployment Insurance system is more accountable and better able to respond to the fluctuations of the economy in large measure due to Matt’s leadership. It is our great honor to recognize Matt Harvill with the J. Eldred Hill award for excellence in the public policy arena in service to the employer community, said Gary W. Walsh, UWC Chairman.

By Tamera Fall|2017-12-15T03:02:01+00:00October 31st, 2017|Categories: Unemployment Insurance, Workers' Compensation|Comments Off on Harvill Recognized for Leadership in Unemployment and Workers’ Compensation Policy and Legislation