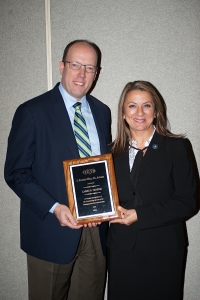 UWC has never before recognized an individual with its highest award posthumously. However, there is so much respect and admiration for this particular individual that the Board felt that he must receive greater recognition from UWC and the National Foundation for Unemployment Compensation.

It is our pleasure and honor therefore to recognize Larry Temple, Former Executive Director of the Texas Workforce Commission, with our highest award – the J. Eldred Hill Jr. Award. This award is named after the long time President of UWC and UBA and is awarded to individuals for “excellence in the public policy arena in service to the employer community.”

This brief award description is hardly sufficient to describe the impact that Larry Temple had on the Unemployment Insurance (UI) system in Texas and nationally; nor does it adequately define or describe the positive relationship that Larry built with the business community and other state workforce agency administrators, over his decades long career in private and public service. Certain people like Larry Temple are not easily defined in words though their actions are noticeable and measurable.

Larry was, simply put, a leader among leaders who was never shy about expressing his opinion and always on the cutting edge of new innovations He wanted to put ideas and innovations into action. As a newly appointed Executive Director at TWC, Larry demonstrated his commitment to active work search and connections between unemployed workers and employers by making work search such a priority that all TWC employees were engaged in assuring that UI claimants were searching for work. Personally engaging with job seekers, Larry would make follow-up work search verification calls, himself, to demonstrate the importance of connecting unemployed workers with jobs.

Larry was an equally effective steward of the unemployment trust fund. He constantly searched for ways to keep unemployment taxes low for Texas employers and beyond Texas he advocated for national policies that returned employer UI tax money to states and employers. As a result of Larry’s hard work, Texas was one of the most innovative states in its use of alternative financing for long term solvency of its unemployment trust fund.

This award is the culmination of lifetime achievement. The UI community previously recognized Larry with the UI Integrity Award in 2008 and the Outstanding Contribution Award in 2010. He served as a Trustee on the Board of the National Foundation for Unemployment Compensation and Workers’ Compensation for 9 years from 2009 until 2018. He, also, served as President for the National Association of State Workforce Agencies in 2008.

Forever personally committed and tireless, as UWC met for its 2018 National Foundation conference in Austin, Larry attended numerous sessions, despite poor health. At this conference he helped guide attendees through the Bullock Museum and sat in to play the role of an employer representative on a panel discussing the future of Unemployment Insurance. 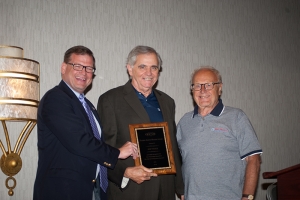 We are pleased to recognize Mr. Joe Vitale with the Father Becker Award. This award is named for the late Father Joseph Becker, a pioneer and scholar in the development of the Unemployment Insurance system. The award is given to an individual who has made major contributions to unemployment insurance research. Joe Vitale has made pioneering contributions on a national scale in systems research and development.
Mr. Vitale began his career with the New Jersey Department of Labor and Workforce Development where he spent 37 years. He was instrumental in establishing the Division of Information Technology within NJLWD and also served 6 years as Department CIO.
He then spent 9 years with NASWA (National Association of State Workforce Agencies) where he was the Director of ITSC (Information Technology Support Center). When the Information Technology Support Center (ITSC) moved under the NASWA in September 2009 he became its first Director under NASWA. He restructured ITSC with a strong customer focus and created an organization that provided accurate, cost effective, and timely service to the states and encouraged the states to work together collaboratively and share their knowledge and resources. In his role with ITSC he served as a presenter at the National UI Issues conference hosted by the National Foundation for Unemployment Compensation and Workers’ Compensation.

In March 2019, Mr. Vitale joined On Point Technology as a Senior IT Executive. With over 40 years of diversified expertise in unemployment insurance, UI training and development, and UI technology, he has lead project managers and program management on large information technology projects including UI IT modernization initiatives.

The UI program now relies heavily on systems for administration of the program. Turning policy into programming and effective use of the systems needed for administration requires a complete understanding not only of the law but also the systems that must be used to deliver the program. Now more than ever this is critical to effective and efficient administration of the UI program for unemployed workers, state agencies and the employers and their representatives who interact with these systems on a daily basis. Joe’s pioneering contributions deserve recognition.
We are honored to recognize him with the Father Becker Award for outstanding contribution to research in the development of systems in the UI system.

Tom Byerley grew up with Unemployment Insurance. He was a lifelong believer in the value of the program. He seemed to be constantly thinking about ways to improve the program and his enthusiasm and dedication were contagious. Even after decades of working in the program he would come up with new ideas and try them out in systems innovations and policy modifications to fit with the changing workforce and program needs.

Tom started working for the Oregon Employment Department in the mail room. He worked as a Job Services Representative, Adjudicator, and in many different management positions. He served as the Unemployment Insurance Director for nine years, leading the unemployment insurance program through multiple recessions including the Great Recession. He was key in many innovations, and always a strong advocate for the program. Just one example is how he led Oregon to be an early adopter of what has since evolved into the Reemployment Services and Eligibility Assessment (RESEA) program. Many of the underpinnings of Oregon’s unemployment insurance program that run smoothly every day are because of Tom’s passionate work and dedication. He was highly respected within Oregon and throughout the nation. Tom was also dedicated to the people he worked with and made a huge impact on so many lives.

It is fitting that today we recognize Tom Byerley with the UI Integrity Award.